Posted on September 2, 2013 by Jackie Dinnis

There is a lovely play park in Hove, right next to the beach, called Hove Lagoon. I remember going there as a child, and later taking my children along when we lived really close to it. I assumed it had always been there, but on looking through some old books I discovered this not to be the case.

Hove Lagoon was created in the 1930s. In the book ‘Hove in Old Picture Postcards’ there is a picture of the site of the Lagoon taken in about 1908. There is some information in the book (Judy Middleton) which tells how the water is a tidal reach, and reminding us how the movements of the river Adur dominated this area for centuries.

In the 14th century the river Adur entered the sea at Aldrington with the outlet staying there for over two hundred years. Then it began to silt up and the river mouth began a westward drift. In the 1930s Hove lagoon was created on the site shown in the above photograph. 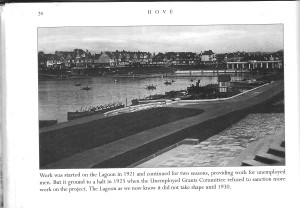 Work was started on the Lagoon in 1921 and continued for two seasons, providing  work for unemployed men. Work stopped in 1923 when the Unemployed Grants Committee refused to sanction more work on the project. The Lagoon as we know it did not take shape until 1930.  Here are some more photographs of Hove Lagoon in it’s early days.

Welcome to my blog where I am enjoying meeting my family - past and present - one at a time. Join me as I learn who my ancestors were, where they lived, what their occupations were and what everyday life was like for them.
View all posts by Jackie Dinnis →
This entry was posted in Beginning life in Hove and tagged History, Hove. Bookmark the permalink.