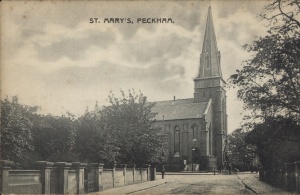 From the above wedding entry, and the England Census entries for 1871 and 1881 we know that both Charlotte and Richard worked as Telegraph Clerks. I assume they met at work, as a lot of couples do. I wondered about the occupation of ‘Telegraph Clerk’ and searched online to find more information.

I found an article on ‘Women in the Post Office’ here: http://www.postalheritage.org.uk/page/women

Under the heading ‘Women’s First Roles in the Post Office’ it says that ‘in 1870 the Post Office was given control of the telegraph system. The women who worked as telegraphists became Post Office employees. This was the first time women had been employed in substantial numbers by the GPO and their employment was seen as something novel and experimental.’

‘For a number of years, women clerks and women working in the largest telephone exchanges and telegraph offices worked physically separately from men even whilst doing the same or similar work. This arrangement was judged to be best for the service and for women’s welfare.‘

So if my assumptions are correct and Charlotte and Samuel did meet at work, it must have been pretty tough to actually communicate with one another. It states ‘In the early days, women were even escorted in and out of the building at times when male workers would not see them.’

“In 1876, the Post Office instituted a marriage bar which required women to resign on marriage and forbade the employment of married women in established positions. The marriage bar was the subject of controversy and debate throughout its life. Some women liked it because they planned to finish working when they married anyway, and found the payment useful for setting up their married home. Others felt that it perpetuated women’s inequality with men.“

So the marriage bar was introduced in 1876, five years after the Post Office was given control of the telegraph system, and six years before the marriage of Charlotte and Samuel. Charlotte would have had to resign, as they both worked as Telegraph Clerks, which seems so unfair today.

Luckily Charlotte found something to fill her time. Along came their children:

There was another child, but I haven’t found them yet. In the England Census for 1911 it states Charlotte and Samuel had 9 children, of which 8 were still living and one had died. It is difficult tracing them, as their surname alters from ‘Crocker’ to ‘Crooker’ and back again. I can find no trace of them in the 1891 England Census.

In 1911 Charlotte and Samuel were living with their two youngest daughters – Ethel aged 20 and Gertrude aged 19. Both daughters give their occupations as ‘draper’s assistants’ and they were living in Streatham. A Draper was a dealer in fabric and sewing goods.

From various London electoral registers we can track Charlotte and Samuel until their deaths. They continued to live in Streatham, until 1929 – the year of Samuel’s death. Charlotte moved to a different address but still in Streatham until her death at age 85 in 1935.

Welcome to my blog where I am enjoying meeting my family - past and present - one at a time. Join me as I learn who my ancestors were, where they lived, what their occupations were and what everyday life was like for them.
View all posts by Jackie Dinnis →
This entry was posted in Charlotte Harriet Dinnis and tagged Family History, History, St Mary's Church. Bookmark the permalink.