Cora Annie Amelia Dinnis was my grand-aunt, the sister of my paternal grandfather, Joseph Taylor Dinnis. Their parents were George Dinnis and Catherine Taylor. Cora was born in March 1886 in Camberwell, Surrey. In the Census of 1891 the family (George John, Harry Leonard Percy, Cora Annie Amelia now aged 5 and Elsie Lilian Julia along with their parents) were living in Gordon Road, Peckham, Camberwell in London. Ten years later in 1901 the family were still living in Camberwell, in Kimberley Road. Cora Annie Amelia was now 15, other children still at home were Harry, Elsie, Joseph and John. 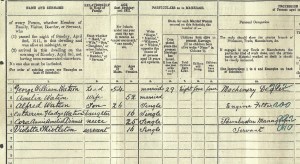 The 1911 Census took place on the 2nd of April. Cora had moved to Leeds and was living with her future husband and his parents and sister. Cora was 25, a Pawnbroker’s Manageress and is listed as ‘niece’ to George William Watson, the head of the household. He was Alfred’s father, and Alfred and Cora married shortly after. Alfred is an Engine Fitter, and his father George a Machinery Dealer.

It is sad to see George and his wife, Amelia had eight children but only four were still living. They were all living at 8 Roundhay Mount, Leeds in Yorkshire.

The marriage of Cora Annie Amelia Dinnis and Alfred Watson took place on the 15th of April 1911 at the Parish Church of St Aidan in Leeds. This document states they were living at 6 Roundhay Mount, and confirms Cora worked as a Pawnbroker’s Manageress.

From the probate records we know Cora died on the 30th September 1963 and states ‘Administration Wakefield 20 January to Elsie Amos married woman. £1505.’ This doesn’t appear to be Cora’s sister, Elsie, she married Willie Hannam. It might be that Cora and Alfred had a daughter which they named Elsie, but I haven’t found any information about her yet.

Welcome to my blog where I am enjoying meeting my family - past and present - one at a time. Join me as I learn who my ancestors were, where they lived, what their occupations were and what everyday life was like for them.
View all posts by Jackie Dinnis →
This entry was posted in Cora Annie Amelia Dinnis, Elsie Lilian Julia Dinnis and tagged Family History, History. Bookmark the permalink.