During an online search I discovered there is a tour of the Old Ship Hotel in Brighton on the first Friday evening of every month. I was so excited about this because it is the hotel where John Dinnis and his family lived and worked in the mid 1800’s. John is my great-great- grandfather, and his youngest son George is my great-grandfather. To find out more about them, you can click on their category or on the Old Ship tag to the right of this post. 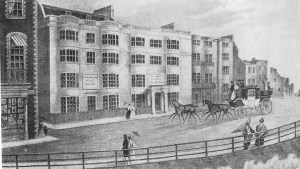 I turned up for the tour along with three other ladies and met our guide for the evening.  I didn’t take my camera because I wanted to concentrate on listening and just ‘being there’. I certainly learned a lot! It’s the oldest hotel in Brighton, dating from 1559 and although I was really only interested in the bits from 1840 -1870 I couldn’t help wanting to know more about the whole story. We heard about ‘The Great Escape’ of King Charles II in 1651, which probably deserves its own post here. There were many tales of smuggling lace and tea among other things, and sitting in the cellar rooms you could really imagine all this going on.

The corner of Ship Street

The hotel has been built up gradually, with neighbouring properties bought over the centuries, and you really get a feel of the ‘bits added on’ as the floors are all at different levels with steps and slopes connecting different areas. The main meeting rooms and ballroom are upstairs and still retain a lot of original features. My favourite part was the ballroom, there is a small balcony where the musicians would have performed as the dances took place. The famous violinist Paganini played there in 1832, which is before the Dinnis family were there. Charles Dickens stayed at the hotel at various times between 1837 – 1868 and gave readings here. The Dinnis family would have been here around 1850, so could well have met Charles Dickens, maybe great-great granddad even cooked for him, who knows!

Another literary visitor to the hotel was William Makepeace Thackeray, author of ‘Vanity Fair’, published in 1847. Two of his characters, George and Amelia spend their honeymoon at the Old Ship Hotel.

We were told that the servants would have lived above the ballroom, in the tiny rooms at the top of the building. We didn’t see these, but imagining that my family were actually up there when my great grandfather’s twin sister, Cora, died aged 3 was sad.

Another aspect of the hotel that was new to me was learning about the owners of the building over the years. I learnt that new owners took over in 1851 – just about the time John Dinnis got his job there. 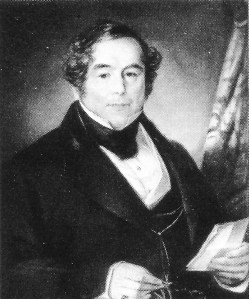 The next part of the tour took us down to the cellars, which seems to be just as it was in the past. Old brick tunnels lead you through from one room to the next, there’s no natural light of course and in the 1800’s it would have been lit with candles and gas lamps. I’m fairly tall and had to stoop the whole way round. There is a space which is set out like a bar, and I wondered if this is where John Dinnis worked his days as Publican and Cook.

One of the results from my tour has shown up in my reading lists, the books piled on my bedside table now include ‘Vanity Fair’ and ‘Dombey & Son’ the Dickens novel that has references to Brighton in it. I also have a whole heap of knowledge about Brighton and the Old Ship Hotel that I want to properly reference and put in some sort of order!

I really want to go back on the tour again, and this time take plenty of pictures and notes, but I feel a little embarrassed to go back so soon. Maybe in the new year I’ll return.

Pictures taken from:  ‘The Old Ship’, Raymond Flower, 1986, and my own collection.

Welcome to my blog where I am enjoying meeting my family - past and present - one at a time. Join me as I learn who my ancestors were, where they lived, what their occupations were and what everyday life was like for them.
View all posts by Jackie Dinnis →
This entry was posted in Catherine Ann Dinnis, Charlotte Harriet Dinnis, Charlotte Robinson, Cora Dinnis, DINNIS, Fanny Dinnis, George Dinnis, Harry Dinnis, John Dinnis, John Henry Dinnis and tagged Brighton, Charles Dickens, Family History, History, Literature, Old Ship Shades, Ship Street, The Old Ship Hotel. Bookmark the permalink.

6 Responses to Visiting The Old Ship Hotel in Brighton