Gordon Charles Dinnis had one job for most of his life. He began working there before he joined the army and served in World War 2 and stayed until his retirement aged 65. He worked at W.R. Newcombe Ltd, a wholesale clothing, textile and footwear firm as a mens clothing salesman. It was a very old-fashioned establishment, buying clothes and selling them onto small clothing shops in Brighton and Hove.

Dad spent his days arranging his stock of mens shirts, ties and jumpers etc, and buying more stock and selling it to the salesmen who visited Newcombes. It was situated in Richmond Place, and was an old building overlooking St Peters Church. 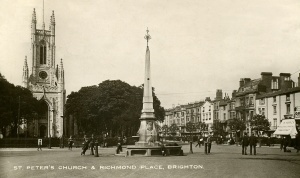 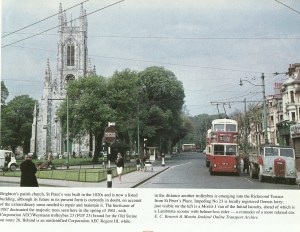 St Peters Church with Richmond Terrace on the right in 1961. From ‘Streets of Brighton’ 2004

He would come home for lunch every day, and I remember winters where he would walk across the Race Hill in deep snow to get to work, when the buses stopped running. 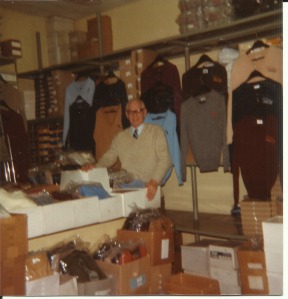 I remember one Sunday when there had been a fire at the clothing warehouse. I’m not sure of the date, I think it would have been in the mid 1960s. Dad was very upset and rushed to help rescue and sort out any clothes, although not much could be saved due to the smoke damage. His department was on the ground floor, at the rear. 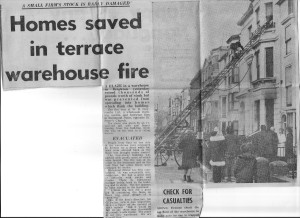 A blaze in a warehouse in Brighton yesterday ruined thousands of pounds worth of stock but was prevented from spreading into homes which flank the building. The fire was at W.R. Newcombe Ltd., a wholesale clothing, textile and footwear firm in Richmond Place, opposite St. Peter’s Church. The alarm was given by an 11-year-old girl who saw flames coming from the building while she was on her way to a riding lesson.

People from flats on one side of the warehouse were evacuated by firemen for a short while but were soon allowed back as the blaze was brought under control. The four-storey building was packed with goods, most of which were boxed. The fire was at its worst in the basement and on the first floor but other floors were damaged by smoke.

Divisional officer Les Ellis commented: “It was potentially very dangerous. We had a good deal of difficulty with smoke and flames. There is substantial damage inside, both to the building and to stock. The fire appears to have started in the basement. I think the men did a good job in containing the blaze as there was some danger of it spreading.”

One of the firm’s directors, Mr G. Bailey, said it was impossible to put a figure on the amount of stock ruined. “But it would be fair to say there was thousands of pounds worth inside. The place is our only warehouse. We are a small firm.”

Welcome to my blog where I am enjoying meeting my family - past and present - one at a time. Join me as I learn who my ancestors were, where they lived, what their occupations were and what everyday life was like for them.
View all posts by Jackie Dinnis →
This entry was posted in Churches, Gordon Charles Dinnis and tagged Brighton, Clothing Warehouse, Family History, Fire, History, Newcombes, St Peters Church. Bookmark the permalink.

2 Responses to My Father’s Occupation