Don’t Quote Me on That

We are able to say ‘I have fallen but I will get up.'”

For today’s writing 101 task we are asked to choose a favourite quote and write about it in any way we choose. One of my favourites is the one by Maya Angelou above. I wanted to write about it, and to link it to my family history blog. Everyone falls at some point in their life, and looking at some of the people in my family tree I can see a few who fell, had the courage to face their fears and got back up.

Back in 1862 my 2x great-grandfather John Dinnis was declared bankrupt. At the time he was publican and cook at The Queens Head, Steine Street in Brighton and lived there with his wife and six children. But he picked himself up and in 1871 he was back working as a cook and living in Finsbury, Islington with his wife, son George (also working as a cook) and his two youngest daughters Fanny (a milliner) and Charlotte (a telegraph clerk). 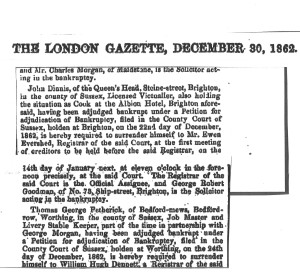 In the column ‘on whom committed’ it states ‘New South Wales Government Resumed Areas Department.’ I have also got a lot more research to do on Richard, he seems to have led a colourful life! However he kept getting up after each knock back.

Finally my maternal grandmother, May Annie Doris Cockett (Queenie) gave birth to my mother when she was unmarried. Mum’s birth certificate has a line drawn through the ‘father’s name’ space, and I’m still trying to find out who he could have been. But it doesn’t mean I think any less of my grandmother. That must have been such a difficult thing to go through, she gave my mother up for adoption. 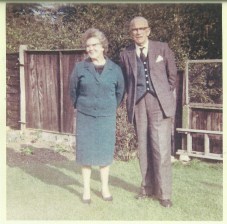 Queenie and her brother

I hope I show the same strength of character as I face my fears. I hope I can say “I have fallen, but I will get up.”

Welcome to my blog where I am enjoying meeting my family - past and present - one at a time. Join me as I learn who my ancestors were, where they lived, what their occupations were and what everyday life was like for them.
View all posts by Jackie Dinnis →
This entry was posted in jackiedinnis, Queenie Cockett and tagged Courage, facing our fears, Quotes, Richard George Crocker, Writing 101. Bookmark the permalink.